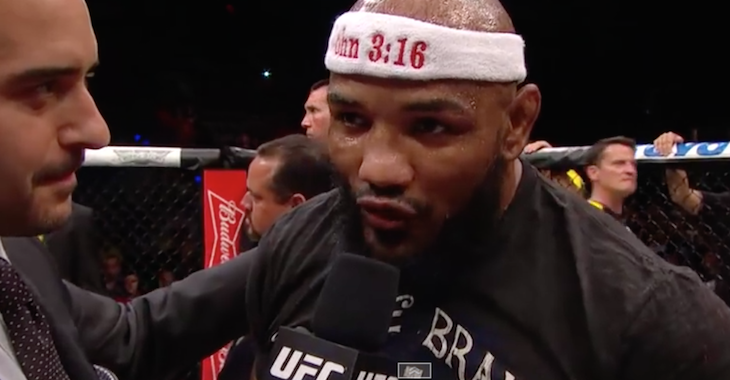 “The last thing on my mind was that he might be taking a shot at that unprecedented ruling on gay marriage. He has been one of the more outwardly religious guys in the UFC. He makes Vitor Belfort sound like an atheist. So this has always been the book on Yoel Romero, so when he starts spouting about Jesus Christ and religion it’s not that I tune him out, but my inner monologue is as soon as he’s done I really need to get something out of the fight, because this was the biggest win of his career and we need to try to advance that story and potentially have him call out ‘Jacare’ or whatever was gonna happen next.”

UFC commentator Jon Anik was tapped with handling the in-octagon interviews after fights at this past weekends UFC Fight Night: Machida vs. Romero.

Anik talked to The MMA Hour about his interview with Yoel Romero, who knocked Machida out senseless with several elbows, and why he didn’t even realize it was so controversial until after.

Romero went on a rant about Jesus Christ and America, at one point clearly saying ‘What happened to you, USA?’ then after that a line that seems to be up for debate. Some think he said “No gay Jesus”, while others heard “No forget Jesus.” It was assumed and understandably so, that he was talking about USA’s supreme court ruling on gay marriage. After the event, at the post fight press conference, Romero tried to clear things up by saying that he was talking about the American dream.