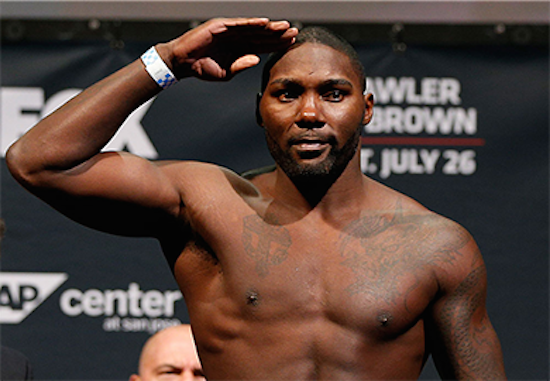 Recently however, the UFC’s investigation turned up that Johnson was innocent, which he maintained throughout the entire process, and ‘Rumble’ was reinstated. Not only that, he was quickly signed to fight Alexander Gustafsson in Sweden in January.

Johnson joined Ariel Helwani on The MMA Hour to discuss what it felt like when the suspension was lifted.

“I cried. Whenever I got home, I cried. I cried just because with so much going on and me not giving up and still having faith and believing in myself and stuff like that…I was emotional man, you know? Going through so much in somebody’s career and you get one of the biggest opportunities of a lifetime, that comes right to you. I couldn’t do anything but cry.”

“There’s nothing really to say; it’s been dismissed and that’s all that matters. Both parties went their own way. That’s the end of the story. I don’t have any hard feelings towards her. Like I said, I’m just going to stay positive no matter what. So there’s really nothing more to say.”