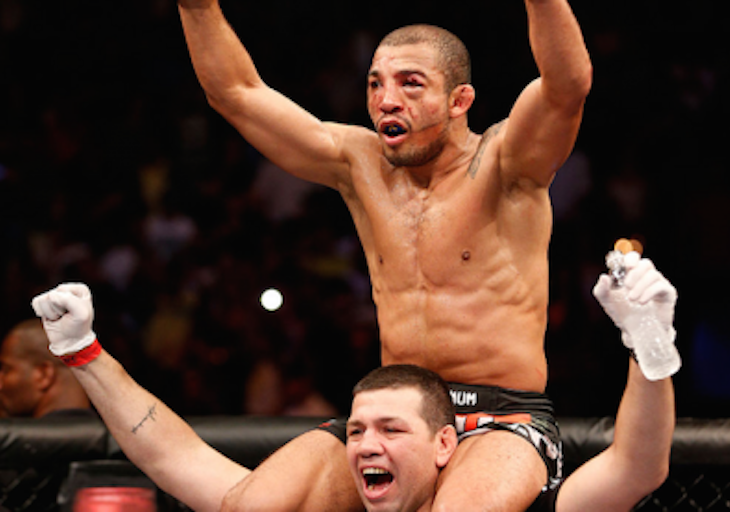 UFC President Dana White recently announced that if Conor McGregor defeats Dennis Siver, he will be next in line for a title shot against Jose Aldo, and potentially in Ireland.

John Kavanagh, Conor McGregor’s coach at Straight Blast Gym Ireland (SBGi), says he doesn’t care where a potential bout between Aldo vs. McGregor goes down, and discusses where he feels McGregor has an advantage over the champ.

“I believe Aldo has faced guys who were accomplished grapplers that were learning striking, and he’s looked good against those. But he does have that intimidating factor, you know. The big leg kicks and the fast hands, and he gets people on the back foot, and their skill level goes down when they’re shooting from the other side of the octagon. But now he’s gonna to fight someone who I believe will not only match him, but supersede him in the striking area. And he’s going to feel what it’s like to be on the back foot and what it’s like to feel intimidated in that range. I believe he’ll turn Aldo into a grappler pretty quickly. I could see him being the one trying to take Conor down and I do think that’s gonna be his first experience with that. It’s gonna be a major difference than anything he’s faced before.”

“Yeah I don’t know if you saw this video that they did when Conor visited Brazil and they put him on a stage and basically had a couple of thousand people just give him abuse. And you could see Conor’s reaction. It was smiling, laughing. He thrives on this. And of course the Dublin show would be fantastic, very good story to do it here in Ireland, but I think that unlike Aldo, rather than be effected by negativity from like the crowd, he rises to that occasion and he loves it. So I have no doubt we will do a fight in Brazil at some stage. Brazil is a hotbed for producing great fighters and they’re also a bit like the Irish fans. They’re incredibly passionate for their own fighters. And that’s what we kind of grew up with here. Like when Conor was kind of coming through the early stages, we were always having to travel to the UK and travel around Europe, and to fight big fights. You know they weren’t in Ireland back then, they were around Europe. And we were always the visiting fighter. We were always the ones getting booed and heckled. And you know at the end of the day it’s you and one guy plus a referee in the cage. And that’s all that matters.”

Kavanagh also spoke about a potential McGregor move to lightweight or welterweight.

“100 percent no [to moving to Bantamweight]. He’s going to go up a division and that’s a certainty. He will go up to lightweight. And people say I’m nuts when I say this, but I could actually see him taking out the welterweight division as well. But right now the featherweight belt is the goal and then the lightweight belt, and then we’ll see how he’s going. But for bantamweight, he would have to saw off at least one of his legs, possibly two.”