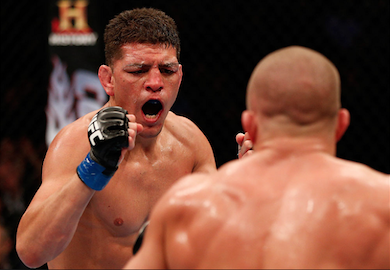 Joe Schilling is one of the most feared Kickboxers in the world. So naturally when he sparred against Nick Diaz, who is an extremely intimidating fighter, the two clashed, and things were intense.

After the sparring session however, Schilling and Diaz became friends, even to the point that Schilling will be heading to Stockton to train with the Diaz brothers for his upcoming Bellator fight against Melvin Manhoef.

He spoke to Ariel Helwani on The MMA Hour.

“I went there to spar with Nick, and we pretty much had a gym war, and we’ve been pretty much good friends ever since,”

“I describe it like a schoolyard fight with two kids who hate each other and then they become best friends. “It was kind of like that. I was a paid sparring partner, he was training for a big fight. I was paid to go in there and spar. When you pay somebody for sparring, you go in there and they expect you to go to work. We had a good scrap and we became friends afterwards. There was no knockouts or anything, we went at it pretty good and we found respect for each other and we became good friends.”