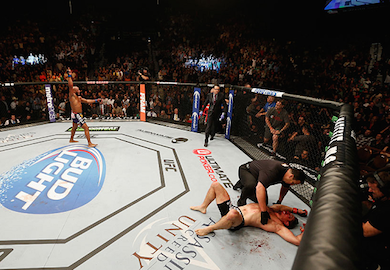 UFC commentator Joe Rogan is never one to shy away from speaking his mind, and he did so on a recent episode of his podcast, The Joe Rogan Experience, where he discussed his thoughts on ‘stoolgate’ at UFC 178, where Yoel Romero’s corner stalled an extra 29-seconds between rounds to give their fighter time to recover.

“If Romero was standing up they might have said there was too much Vaseline on and it would have taken two seconds to wipe it off, but he still sat on that stool. He sat on that stool. Just sat there. Tim Kennedy’s in front of him going, ‘What the f—? Get up! What’s going on?’ He’s still just sitting on the stool. That should be it. ‘Big John’ should have called the fight right there. You can’t just sit on the stool.”

“You can’t let that happen. You don’t expect it to happen but I guess you have to be diligent with some corners who, they know, know how to get themselves out of a f—ing situation.”

“Yoel Romero knew that the round was over. He knew he was getting extra break. 100 percent. One thousand million percent. He was sitting there. Kennedy was in front of him saying, ‘What’s going on? Get up!’ And he still just sat there. That extra 29 seconds was f—ing gigantic.”

You can see the video of Kennedy confronting Romero about the situation backstage HERE, and read our breakdown of the whole controversy HERE.