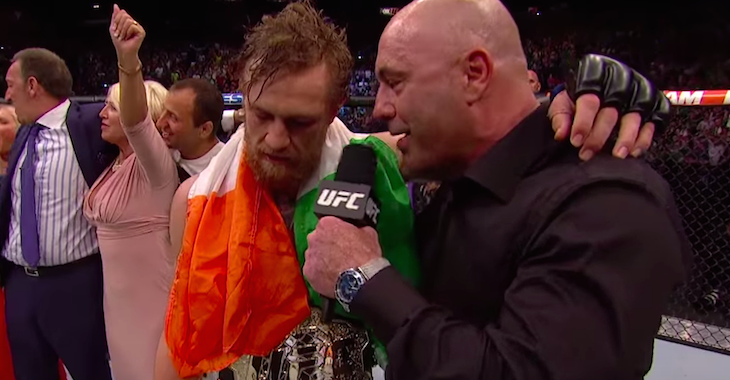 The stage was set for one of the biggest championship fights in the history of mixed martial arts history at UFC 189. Jose Aldo scheduled to defend his UFC Featherweight Championship against rival Conor McGregor in a match for the ages. Unfortunately, that fight never took place.

Aldo was forced to pull out of the fight due to an injury and Team Alpha Male’s Chad Mendes was called upon as a late replacement. With a shortened training camp, Mendes stepped in to save the the main-event as he clashed with Conor McGregor with the UFC Interim Featherweight Championship now up for grabs.

After his co-hosts/friends discussed the how much more interesting the UFC would be with no titles, Rogan went on to comment on the interim championship situation between McGregor and Aldo:

…Let’s be honest. McGregor has an illegitimate belt. It’s a made up belt. We call it the ‘interim’ belt but Aldo defended his title a year ago. Stripping a guy because he doesn’t— because he can’t get through a camp without getting injured is a part of MMA. It’s always been a part of MMA. But, because of the marketing, because of the hype behind it, because of the HUGE event, the enormity, the economics of the event, they decide to make [McGregor vs. Mendes] an interim fight. He’s got a title. Aldo’s got a title. They both have titles. So they’re fighting for the undisputed title.

Rogan is as much of a business man as he is a voice for change; The UFC commentator knows the importance the interim title played in the bout between McGregor and Mendes and did not mean the comments above to be a dig at former interim champions. However, do you think the UFC would be better off and more exciting with no championships involved? Share your thoughts in the comment section below!