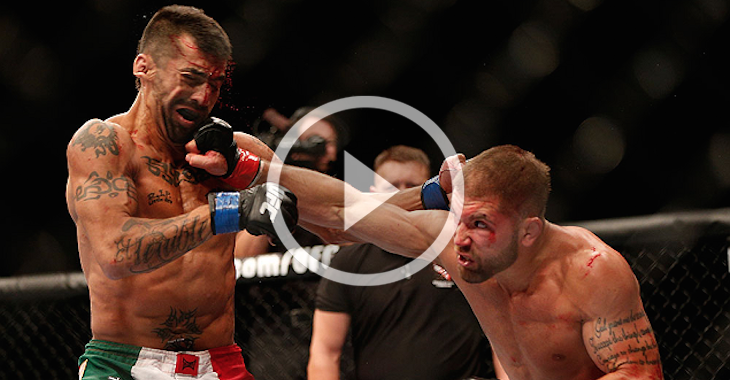 It isn’t a secret that Jeremy Stephens has knockout power. “Lil’ Heathen” possessed 15 knockouts walking into his “UFC 189” bout with Dennis Bermudez and he made it clear he was going for number 16. Bermudez tried his hardest to avoid getting hit, but Stephens caught him with an uppercut in the second that was the beginning of the end. It wasn’t long before Stephens collected his 16th knockout with a flying knee.

When BJPENN.COM Radio asked Stephens if he thought he was one of the hardest hitting featherweights in the division, he simply answered, “Yeah.”

“[My knockout power] is just something I’ve been blessed and born with, Stephens told us. “From the beginning, I remember getting into fights as a kid and having to defend myself from bullies and being to land a shot like that— it’s awesome. I’m blessed to have good power in my hands.”

Stephens felt he had the power to stop Bermudez, but knew it wasn’t going to be an easy task to finish the fight.

“Bermudez is a tough guy, but I knew he was going to push the pace and that he’s very offensive. He leaves himself open a lot and he comes forward into the clinch and he’s constantly leaning. A guy like that, you’re not going to be able to hit too many feigns and fakes without him trying to break up that rhythm,” Stephens explained.

As expected, Bermudez kept trying to press the action and throw combinations while Stephens was near the fence. Stephens countered with a brutal uppercut that was the beginning of the end.

“Toward the third round I felt like I was going to knock him out… I wobbled him once and I knew that I was going to catch him again. We timed a perfectly timed knee when he was going to try and come in and engage that wrestling, which he’s known for.”

The rest is history. Stephens’ and Bermudez’s amazing fight took place on one of the greatest, if not THE greatest, events in UFC history.