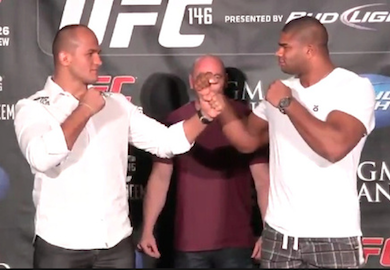 “He took some time off and is now back to training. We’re thinking about a fight around May or June, but there’s nothing set yet. The UFC has great athletes, the best, but a fight that we wanted to see is against Overeem. It was expected to happen before and didn’t. But they have great fighters in the UFC, so anything can happen. He will fight anyone they want. We have plans to spend some time in the U.S., seek new training. We need to continue to evolve. When an athlete thinks he knows everything, it’s the beginning of the end. We need to learn new techniques, so we plan to go to the U.S. to train wrestling and also train in other gyms in Brazil.”

Former UFC heavyweight champion, Junior dos Santos, has been sitting idle in Brazil since his failed attempt to regain his world title from Cain Velasquez.

According to a recent interview with MMAFighting.com, his coach, Luiz Dorea, believes the Brazilian will be ready for a fight come spring and if Alistair Overeem gets passed Mir, they want to Reem fight that previously eluded them.