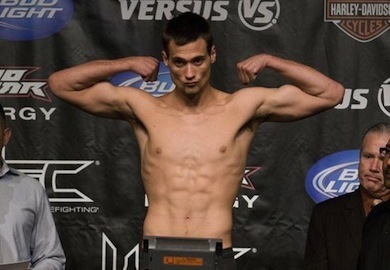 Through all the injury shuffling that took place for this weekend’s UFC 161 main card, there are still plenty of reasons to purchase the PPV. Two former MMA champions do battle while two intriguing heavyweight fights take place.

While some fans are understandably opting out of the PPV bill for this particular event and catching the replays later on in the night, there is still plenty to offer on the undercard.

The spectacle highlighted by this particular article is that of Missouri native (Virginia born), James Krause (19-4). Krause has been on a tear lately, riding a seven-fight win streak since 2011 and dropping two fights in a row just once, losing to UFC fighters, Donald Cerrone and Ricardo Lamas, his first two career losses. Both of these fights took place in the now dissolved WEC promotion.

Now, Krause faces UFC veteran Sam Stout in his promotional debut, replacing an injured Isaac Vallie-Flagg in a lightweight bout that could mean big things if Krause pulls away with a win.

To be honest, I submitted my picks for a Kountermove tournament earlier today, buying up Sam Stout as I felt the UFC veteran may prove too much for the UFC newcomer. I feel, though that I was merely trigger happy to pick a fighter who has been around long enough to earn my pick based off the highlight reel that I played in my head moments before picking him.

In reality, the hasty fashion in which I picked Stout to win could very well prove to be a mistake as Krause isn’t a late replacement who just happened to have a weekend off from a small regional show you’ve never heard of. No, Krause is a killer.

Before we get to his accolades, lets break down his losses as we know, fighters are indeed human beings. Out of his four losses Krause has never been knocked out. He has two submission losses, one to Donald Cerrone and the other to Toby Imada, two men whose total submission victories account for more than half of their total wins, (13 out of 20 for Cerrone, 20 out of 30 for Imada).

Decision losses to Lamas and Clay French (19-6), while the latter of the two was a razor-thin split-decision.

He did try out for a spot on the lightweight roster of The Ultimate Fighter 16 but was upset by Justin Lawrence in the preliminary round of casting as the roster was cut from 32 fighters to 16. This bout was considered an exhibition fight, however and was never put on his official professional record.

His wins are a much different story. The 27-year old Krause started his career in a dead sprint, winning his first ten while finishing all ten fights in the first round. Of these ten fights, an astonishing grand total of seven were fought in the same calendar year, 2008. As for the method of his first ten wins, eight were by submission while two came by (T)KO, the second by a vicious head kick.

Then came the rough patch for Krause as he amassed a 2-4 record over two years of fighting.

He bounced back, however, picking up another impressive win streak as his next seven fights were victories for Krause, his latest erasing a loss to Toby Imada as he took Imada into deep waters and stole a decision victory. Krause’s move to the UFC was something that Krause longed for as a win over Joe Jordan at RFA 5 prompted Krause to call out UFC matchmaker Joe Silva as Krause told Silva to “Give [him] a call sometime.”

Krause got his wish just one victory later and will now fight for a spot in the stacked lightweight division against a grizzled UFC veteran who doesn’t go away easily. Krause will have 15-minutes to prove why he belongs and based off his career both on paper and from his impressive runs in just 5 and a half years of professional fighting, he may just do that with time to kill.