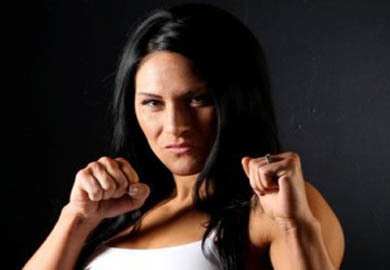 It was recently announced that Cat Zingano has signed a contract with the UFC, and will be fighting opposite Meisha Tate in the second ever UFC Women’s match on the TUF 17 Finale card on April 13 at the Joint at the Hard Rock Hotel and Casino in Las Vegas, Nevada.

Many MMA fans are not very familiar with Cat because she has not been fighting in the largest organizations, where women are only recently starting to make a noise. Cat “Alpha” Zingano, is a 7-0 American mixed martial artist training out of Denver, Colorado. At 30 years old, she is a mother, and wife to Brazilian Jiu Jitsu black belt Mauricio Zingano.

Cat started wrestling in her youth (age 12), and continued throughout college. She was a 4 time All American and National Champion, and even went on to compete internationally as an integral member of Team USA, training with Olympic medalists. In 2007, Zingano began practicing Brazilian Jiu Jitsu and soon started dominating tournaments such as the Mundials World Championships in Los Angeles and Rio de Janeiro State Championships in Brazil. She then decided the next step for her was Mixed Martial Arts.

Cat Zingano has been competing in Mixed Martial Arts professionally since 2008, winning 4 championship titles in only 7 fights. Cat won the Ring Of Fire Women’s Bantamweight and Flyweight championships, and the Fight To Win Women’s 120 and 130 pound championships. A bloodthirsty fighter, Zingano has finished 6 of her 7 pro fights.
Does Cat Zingano have what it takes to be a UFC Champion? Time will tell, as the winner of this fight could find herself next in line for a shot at the gold.