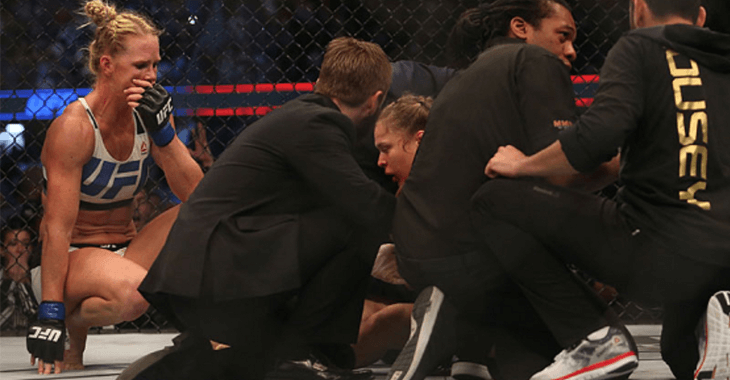 Holly “The Preacher’s Daughter” Holm has a very kind heart, but just be aware that if you are matched up with her, she will hurt you.

The UFC women’s bantamweight champion appeared on the MMA Hour on Monday and discussed her feelings on fighting, and her life-changing win to become the champion by knocking out Ronda Rousey at UFC 193 (transcribed by MMA Fighting):

“I don’t think that anybody deserves that,” Holm said when asked about Rousey being ridiculed by fans after UFC 193. “I do think that she put herself in that position. She’s even said herself that if people don’t like her style, then she doesn’t care. That’s who she is and she doesn’t claim to be anybody else. I don’t have any animosity towards her. A lot of people feel like maybe I should, but I just don’t waste energy with stuff like that.”

“I don’t think that some of the negativity that she’s received — some of it is not necessary,” Holm said. “People get pretty brutal about stuff. But I think she’s tough enough. I think she can handle it. I don’t think she’s ever felt something like this before. I think she is going through a really rough time. I’d be dumb if I said anything different.”

Knowing all too well of what it feels like to be on the losing side after being knocked out in a boxing match, Holm said that she feels bad for her opponents when they lose, but winning is what she is in the sport for.

“Not bad enough that I would change the decision,” Holm said when asked if she felt bad. “I always sympathize with my opponents no matter what. If you win, they’re going home with a bad day. That doesn’t mean I want to give them the victory.

Despite Rousey’s low moments after losing, Holm needs to concentrate on herself, especially now with her first fight defending her title against Miesha Tate coming up in March.

“She has to be kind of bitter right now,” Holm said. “That’s OK. I really just want to do my thing and represent myself well. I’ll give her the respect along the way. However she handles it is her own deal. I don’t want to lose sleep over it.”

Who are you picking in Holm’s first title defense fight with Tate? Share your pick with us in the comments!