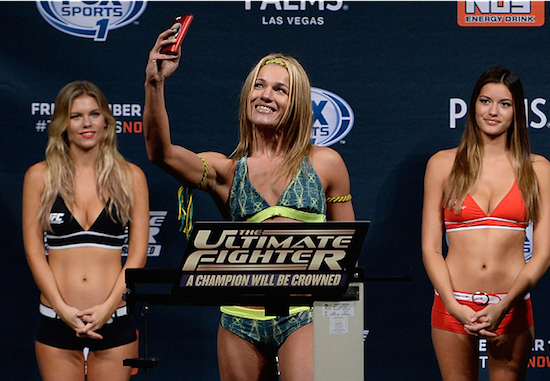 Herrig caught criticism on the show for what she believes is people saying she’s “an attention whore”, and admits that the show was stressful on her.

She spoke to MMAFighting about her popularity, the show, and her motivation to stay true to herself.

“It caused a lot of stress for me. I’ve been kind of depressed.”

“People don’t get to see the whole, everything that goes on. They see little bits and pieces. When all is said and done and everything is airing, they choose what to put on and everything is going to be amplified on the show. Everything is to the extreme. It’s so far from reality. People aren’t very forgiving.”

“I do think people underestimate me, but that’s because they only see one side of me. It’s a very small piece of who I am. That’s all people see, because that’s all they choose to see. I don’t think I’ve ever gotten credit for being the fighter I am. Just because I know how to market myself, get attention so to speak, that doesn’t mean that’s what I’m all about.”

“Everybody thinks I’m an attention whore, but I’m really not. I’m just myself. Things go viral and I’m like I didn’t plan that.

“That’s not my motive to do what I’m doing. I’m just being myself. I’m realizing more and more how different I am from the average person or the average fighter. To me, it’s all I know. But because it’s unique in a sense, there’s not really that many people like me. I’m not saying this to brag.”

“They’re the reasons I want to quit fighting. Sometimes you just want to have a normal life where you don’t feel everything you say is going to be put out there and put on blast. There’s a lot of times you feel like you can’t defend yourself or you don’t feel like you should have to, but people are constantly attacking me. I just want to get away.”

“I think maybe I focus on all the people who hate me and talk s— about me. There are so many people that love me. I need to focus on that more.”