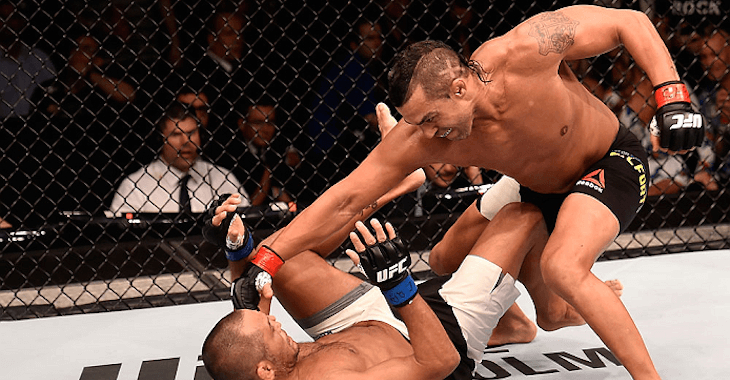 Referees have it tough. They have to walk the fine line of letting a fighter live their dreams and fight on in times of despair like the warriors they are, and also protect them in their best interest in the name of safety and well being. Refs hold the sorcerer’s stick that could ultimately alter a fighter’s entire career and lifestyle with a call that is not always an easy one to make, or always right.

Referee Herb Dean spoke with UFC announcer Bruce Buffer on his podcast about the recent main event stoppage between Vitor Belfort and Dan Henderson at UFC Fight Night 77. Some people questioned referee Mario Yamasaki’s decision to end the fight where they feel Henderson still was more than capable of continuing.

Dean says it could have been a different story if Yamasaki was simply positioned at a different angle (transcribed by MMA Fighting):

“It’s hard to say whether I would have handled it differently,” said Dean. “I think the biggest difference was how close Mario was [to stopping it] at that point. Dan had already gone down. He had taken some shots and Mario was almost at the point where he was touching him. I think if Mario was one step back, which he could have easily been, or a step in a different direction, he could have gotten that second to realize Dan was there and was still in the game.”

Dean says it’s tough being a referee, and none of them ever want the guilty conscious of making a poor decision during a fight. However, it isn’t always the easiest judgment to make.

“At the other hand of it we’re balancing all their hopes and dreams that they’ve sacrificed for against that. That’s how we make our decisions. When we believe it’s no longer competitive, when the guy has nothing left to give it’s time for us to step in and do our job. It’s hard to figure those things out because you can’t feel what someone’s feeling.”

Do you think Mario Yamasaki made the right call in the last fight between Belfort and Henderson? Explain your reasoning in the comment section below.