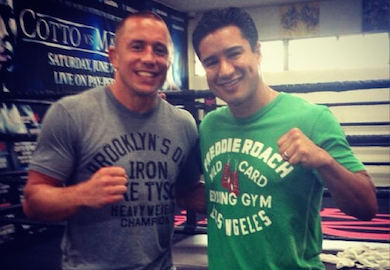 During a recent trip to Southern California, former UFC welterweight champion Georges St-Pierre made the rounds at all the usual spots. One of which is Freddie Roach’s home over at Wildcard in Los Angeles.

While there, GSP ran into longtime television star, Mario Lopez and he offered up this bit of info.

The Caption Reads,  Stopped in to see coach Freddie at Wildcard gym and@MarioLopezExtra was getting ready to start his training. He is probably one of the toughest guy in Hollywood.