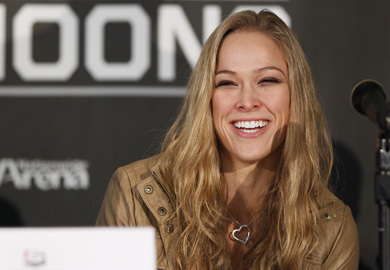 With her recent admission of being a Pokemon fan, UFC bantamweight champion Ronda Rousey was confronted on her knowledge of anime vs. comic fighting by fans in China (Replay HERE).

Ronda happily entertained the question when asked who would win between Superman and Goku, and she impressed Dana White in the process.

“Goku would definitely win, because Superman is already capped out. You know what I mean? His powers are where it’s at and he’s not going to get any more. Goku can destroy an entire planet, and I don’t think Superman can do that, so definitely Goku.

Dana: Wow! She made that sound like a real serious question!