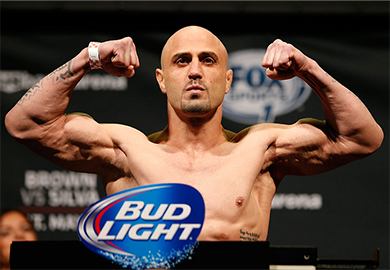 “Let me make this the right way, Bryan Caraway is not my dream fight. I promise you. He’s just another guy out there in my weight class, but I feel like people want me to fight him, fans want me to fight him. As a fighter I respect him, I think he’s got a lot of good techniques, he’s a good fighter and you know, I feel like he’s kinda scared of me. Which I don’t blame him. Am I bad match up for him? I’m a bad match up for everyone, I guarantee you. I’m not a good match up for anyone, but he’s being smart, he doesn’t wanna fight me, or he should have fought me because I’d be the biggest name that he ever fought. Who has he ever fought? I fought a lot of guys, and this guy thinks he fought better guys. He never fought a good guy, but again he’s not my dream fight. Is he the guy I’m looking up to? No, never. If it never happens, I’ll never ask for it. I called him out on Twitter, on Instagram, on Facebook, on Ariel Helwani’s show, and now here. So if it’s not happening, then why would I beg? Clearly the guy doesn’t wanna fight me, and I said I don’t blame him. So I have bigger and better talent at this weight class.”

In a recent interview with Submission Radio, Manny Gamburyan discusses his rivalry with Bryan Caraway.

The two hail from opposite camps. Gamburyan of Team Rousey and Caraway of Team Tate.