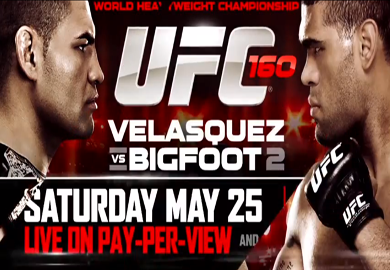 Gambling itself is risky; however, gambling on mixed martial arts is one of the most dangerous ways to wager your hard earned money. Before bets are placed, a bettor should look at every single fact that is available. Having a gut feeling and believing something unlikely could happen will not make it happen… you need to bet intelligently.

In this edition of ‘Gambler’s Odds’ I will break down a number of situations and provide facts that should help you make a choice of whether or not the payoff is worth the risk. In the last two fights of the card, Cain Velasquez will be taking on Antonio Silva while Junior dos Santos tries to pick up a victory against the seemingly unstoppable Mark Hunt. These men have a lot of power packed in their fists and a number of things COULD happen this weekend when they step into the octagon. Let’s take a look at the most popular betting situations.

The odds of this happening? Highly unlikely. Earlier on, I preached about how important it is to bet solely based on facts and nothing else. Believing something is going to happen and wagering major money on it is one thing, but putting $10 on a silly bet that has a nice payoff is harmless. Antonio Silva has been on a tear as of late, knocking out Travis Browne in Round 1 and Alistair Overeem in Round 3.

As the fight goes on, the odds for Antonio Silva to beat Cain Velasquez in ‘Round X’ drastically get worse— and with good reason. Velasquez outclassed Silva in their first meeting and I don’t expect anything other than that to happen this weekend. However, if “Big Foot” connects with a punch to the jaw of Velasquez, there’s a good chance Velasquez will collapse. It has happened before.

Gambling isn’t a profitable job. It’s something to do if you have the money and want to have some fun. This is a fun bet that will keep you on the edge of your seat, and will make you spill your beer in elation if it actually happens.
————————————————
The Situation: Cain Velasquez Wins In Round 1
The Odds: +200
The Payoff: Bet $10 to win $20
Chances of Happening: VERY HIGH

These are the types of odds that will make a bettor salivate. There shouldn’t be a need for explanation with this situation but an elaboration is required, so pay attention. Cain Velasquez has already met Antonio Silva in the octagon and (technically) knocked him out in Round 1! The fight will have happened just one day short of a year ago on Saturday, and Cain Velasquez has done nothing but improve. His fight against Junior dos Santos displayed the hunger of a former champion wanting to win the title back. After showing new techniques and dominating dos Santos, Velasquez regained his throne at the top of the UFC Heavyweight Division. The odds on Velasquez winning in Round 1 this weekend are one of the best you’ll find all summer.
————————————————
The Situation: Mark Hunt and Junior dos Santos Goes the Distance
The Odds: +140
The Payoff: Bet $10 to win $14
Chances of Happening: AVERAGE

Ever since losing to Sean McCorkle back in 2010, Mark Hunt has been an extreme underdog. Bookies look at this “soft” Samoan and typically don’t see a mixed martial artist. His fights against Chris Tuchscherer, Ben Rothwell, Cheick Kongo and Stefan Struve all saw Mark Hunt walk into the octagon as the underdog and when all was said and done, he would walk out with his hands raised in victory. Not just any ordinary victory either, he’s usually walking out with highlight reel finishes that fans and media never saw coming. Hunt’s power is scary, but dos Santos’ ability to repeatedly eat Velasquez’s punches and kicks was a bit scarier. Each fighter is a game opponent and I think the odds should be closer for this fight. There is definitely a possibility that Mark Hunt outstrikes Junior dos Santos and takes him to decision.
————————————————
The Situation: Mark Hunt Wins
The Odds: +360
The Payoff: Bet $10 to win $36
Chances of Happening: AVERAGE

All the facts above apply to this situation, except we now have a better shot at making more money on Mark Hunt. To make a long story short, Hunt constantly defies the odds and Junior dos Santos can take a helluva beating.
————————————————

Agree? Disagree? Do you think gambling is silly? Share your opinion with us by commenting below or tweeting us!

This column does not contain predictions on who we think is going to win, but rather which underdog has the best chance of winning and making a bettor money. There are no such things as “locks” in the world of mixed martial arts. Gambling is not a way to make ends meet; it should be a way for people who can afford to gamble to have fun. If you or anybody you know has a gambling problem, please call 1-800-522-4700.