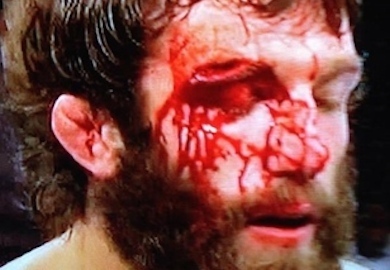 At UFC Fight Night 50, Joe Lauzon landed a knee that opened a cut on the eyebrow of Micahel Chiesa. The cut was one that reminded fight fans of the one sustained by Diego Sanchez when he fought our very own BJ Penn.

“Out of all the bloody three-round wars I’ve seen … Diego, Lauzon and many others, why the hell did they stop my fight?”

“I was never beat, my will was never broken, I was winning that fight. I demand a rematch before the year ends. I hope you all were entertained, you guys got robbed as much as me. That fight was going to be a three-round war. We all got robbed.”