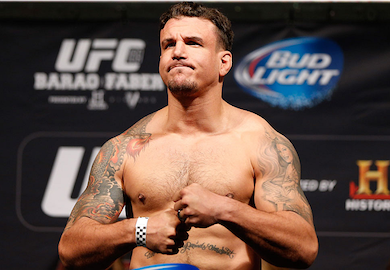 Frank Mir’s legacy in the Octagon is safe, but that doesn’t mean Mir is ready to hang the gloves up just yet. Mir hasn’t been in the Octagon since February, when he went the distance with Alistair Overeem in a valiant effort that saw him lose a unanimous decision.

The loss extended Mir’s losing streak to 4, continuing a trend that hadn’t seen him pick up a win since December of 2011 when he defeated Antonio Rodrigo Nogueira via Kimura.

After the win over Nogueira, Mir lost to Junior Dos Santos, Daniel Cormier, Josh Barnett, and most recently Alistair Overeem.

Mir spoke with MMAFightCorner about his future in the Octagon.

“I really don’t know. I’m kind of just taking time off and weighing that out. That’s a decision that me and my family are still trying to – we haven’t come to a conclusive idea yet.”

In the months since his last UFC appearance, Mir visited Colombia and Argentina to build the sport of MMA, where it otherwise wouldn’t exist.

“Anytime I can use an opportunity to help direct anybody in the right direction as an example for anybody, good or bad, I take advantage of it. My father actually was born in Cuba. I’m first generation. He came over when he was a child. At 9-years-old he came over through Miami via plane (laughs).”

“That’s one thing the [UFC] is helping do, to get awareness out there. Just a couple of weeks ago I was out there in South America helping to develop gyms and schools to develop young fighters in MMA communities. That way it gives them someone to rally behind.”

Do you think we will ever see Frank Mir in the Octagon again?