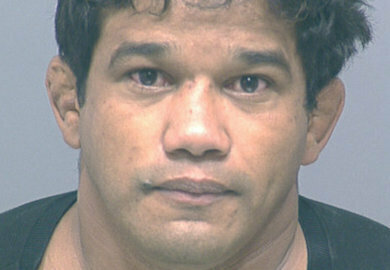 Former UFC fighter Hermes Franca (pictured) has been deported back to Brazil earlier today after serving 2 and a half years of a 3 and a half year sentence stemming from sexual abuse charges.

Franca was sentenced to three and a half years in prison after pleading guilty to one count of unlawful penetration and one count of first-degree sexual abuse.

Franca first rose to MMA superstardom back in 2006 when the then WEC lightweight champion rode a 4 fight winning streak into the UFC. He then went on a two fight win streak in the UFC, submitting Joe Jordan and Jamie Varner before successfully defending the WEC belt against Nate Diaz. After that Franca returned to the UFC and defeated Spencer Fisher to earn a crack at Sean Sherk’s lightweight strap. Franca lost the bout with Sherk and both fighters failed their post fight drug tests.

Franca received a year-long suspension and made his return against Frankie “The Answer” Edgar in 2008. Franca lost the bout via decision but bounced back to defeat Marcus Aurelio before suffering a KO loss at the hands of Tyson Griffin.

Franca was released from the UFC shortly thereafter and went on to fight for several smaller promotions until his arrest in 2012.