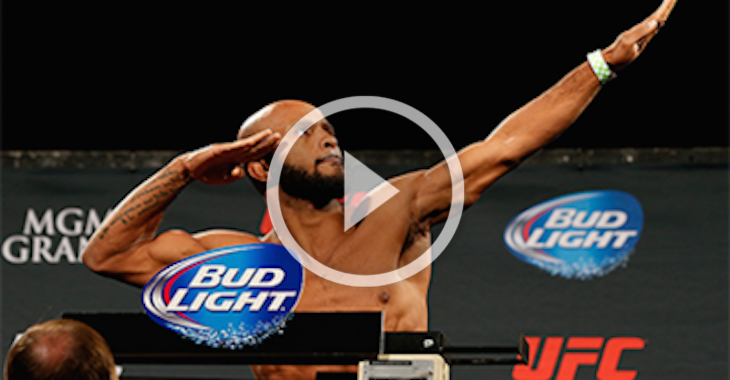 News broke that the UFC has decided to close down half of the stadium at the Bell Centre in Montreal, Canada for UFC 186, headlined by a flyweight title fight between champ, Demetrious Johnson, and Kyoji Horiguchi.

Johnson has been pegged for not being a big draw before and this certainly isn’t helping that notion. Of course, the card itself has suffered several major changes. T.J. Dillashaw vs. Renan Barao were scheduled as the original main event, but was canceled due to injury, then the card also lost Rory McDonald vs. Hector Lombard due to Lombard’s failed drug test and subsequent suspension. Then, Rampage was set to make his return, then he wasn’t, now he is again. So needless to say, this card has had a rough time picking up momentum.

But, according to co-host of Stud Show Radio and Team Alpha Male Fighter Justin Buchholz, the responsibility does rest on DJ’s shoulders. Check out what he had to say on Thursdays episode.

“I could see it in Johnson’s actions, it seems like he’s on edge and he’s not [like] the playful child he portrays, I feel like he’s on edge. I think it’s because he got news that he doesn’t sell a single ticket and half the arena had to get closed down. Pretty serious man, if I’m headlining a UFC card and half the arena–a couple days before the fight–goes, dude I’m going to fight in front of nobody. That would definitely affect me.”

“That has to affect him because that’s his value as a fighter.”

“The responsibility of selling out that arena falls on the champion in the main event and he didn’t live up to it.”

Watch the clip above for more: