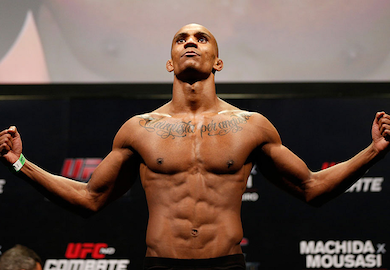 Andrade dropped Musoke with a giant right hand late in the first round and celebrated prematurely. Musoke was still awake and the referee did not stop the fight. Andrade dove in and went for a finish, but he could not wrap things up. Musoke actually almost locked him up in a triangle, as a matter of fact. Musoke was recovered while on his back, but Andrade kept throwing donkey-kong blows trying to end the fight. Once Musoke made it back to his feet, Andrade’s hands were by his side and his mouth was hanging wide open. While on the stool in between rounds, Andrade was breathing heavily.

Musoke picked up on how tired his opponent was and used it to his advantage throughout the rest of the fight. After softening Andrade up with big shots, Musoke would press him against the fence and shoot for a slow, plodding takedown. If he failed, he would tire his opponent out more. If Musoke landed a takedown, he would be winning in the eyes of the judges. Either way, he was benefiting.

Nico Musoke picked up his second win inside the octagon tonight.