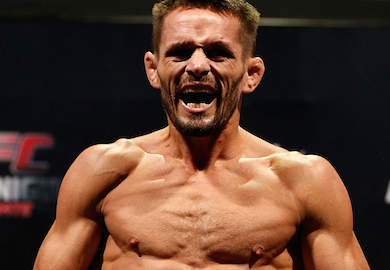 Lucky for the UFC, they haven’t charged anyone for UFC Fight Pass yet so fans cannot complain about wasting their money on a sixth straight decision.

The fight had a slow pace and was even until Damm and Jorge exchanged eye pokes in the second round. The traded eye pokes seemed to had upset both men and they let their hands go shortly after. Jorge did a better job at changing levels which led to powerful uppercuts, while Damm landed a higher volume of strikes.

Damm countered a leg kick with a takedown at the start of the third, and eventually slapped on a crucifix. Jorge didn’t eat anything serious and escaped, but he transitioned to top control and found himself in position to lock in a D’Arce Choke. Damm did a fantastic job at keeping calm and working his way out of it, and they were back on their feet twenty seconds after Jorge thought he had it locked in.

Once back on their feet they started to wing punches from grandma’s house. The crowd was brought back to life for the first time in a long time, but Damm halted all momentum after landing a teep kick to the nuts of Jorge. With only a minute and twenty seconds left in the fight after the nut-shot, neither man had much energy to do anything else. Jorge would fake for a takedown every now and then to pop up and land a shot, but the punches never had enough behind them to end the fight.