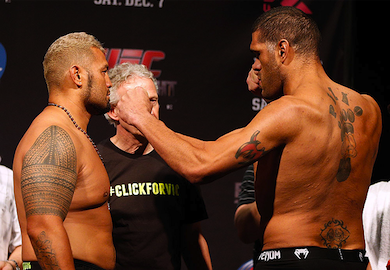 Even though it is December, this may have stolen the rights to fight of the year.

The first round played out as if both heavyweights knew the fight had the potential to go the full five rounds. Their strikes were reserved and they selected their shots, but whenever they fired off it was a big deal. Hunt was being a bit transparent in his strategy as he would feign two jabs, go for a big right cross and a left hook but the combination never landed. Silva dropped Hunt with a shot but he quickly recovered and that was the highlight of the first round.

Mark Hunt absorbed too much punishment on his lead leg throughout rounds two and three and it could have cost him the fight. He got wobbled a couple of times and those lead leg kicks could have taken a lot of power away from Hunt’s punches. Lucky for him, he’s a freak of nature.

Despite taking all the punishment, Hunt fought smart and picked his strikes. He outstruck Silva in the second round and wobbled him a couple times but never had the clear advantage.

Hunt adapted in round three and kept the action close so Silva could not attack the leg. While in close action, he would pop Silva with huge right hands and short uppercuts. In the middle of the third round, Silva got dropped by a big right straight and Hunt dove on top of him. Looking to finish the fight, Hunt poured on an attack so brutal that even he tired himself out. Hunt dished out punishment on top until the horn sounded, signifying that we would see a fourth round of heavy-hitting action.

The fourth round played out much like the third, except with the roles reversed. Hunt started out strong and was dishing out punishment until Silva ended up on top of Hunt. Silva’s big mitts repeatedly pounded Hunt’s face and it was unbelievable that the referee did not stop the fight. Hunt’s forehead got sliced open by one of Silva’s elbows but Hunt was able to tough it out until he was saved by the bell. With two rounds a piece, we would head into the fifth round.

The round opened up with a great sign of respect and class when the two fighters met in the middle of the octagon with a high five and a hug. For the next couple of minutes, it was all Mark Hunt. There was a point where he landed four left hooks in a row. Hunt had Silva pressed against the fence and was dominating him until the referee stopped the fight to look at Silva’s deep cut over his left eye. It was a questionable time to pause the fight and the action was reset in the middle of the octagon. This gave Silva a few seconds to regain his compsure and he took to the offense and started putting punches together. The last two minutes of action was a blur of heavyweight limbs flying, varying from Hunt’s lunging hooks and Silva’s knees from inside the clinch.

When all was said and done, most believed that Hunt should have left the octagon with his hands raised. However, this is the first time in a long time that I can say I watched a majority draw and I couldn’t be happier with the outcome.

What an display of fighting spirit from both men.