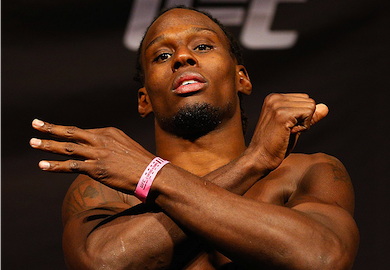 At the beginning of the bout, Kenny Florian was talking about Clint Hester’s nine professional boxing bouts. His boxing experienced showed throughout the first round through everything he did. Whether it was great footwork or poor takedown defense, he displayed the talent of a boxer.

Hester was dominating while standing so Andrews was quick to take the fight to the ground. Hester showed great defense, including an escape of an arm-in guillotine. Even though Hester was able to make it back to his feet multiple times, Andrews took him right back down. Andrews secured the first round with his takedowns and superior ground game.

The pace of the second round was much of the same but with roles reversed. Andrews started off striking with success so Hester bullied his way into a takedown. While on top, Hester was slamming his elbows into the teeth of Andrews which Andrews didn’t like very much. After finally getting back to his feet, Andrews threw an overhand right that was blocked and it dislocated his shoulder. The fight ended before the third round even started.

It was a disappointing conclusion, but there was much respect shown between both athletes at the end.

Clint Hester defeated Dylan Andrews by way of TKO (Doctor) 5:00 of Round 2