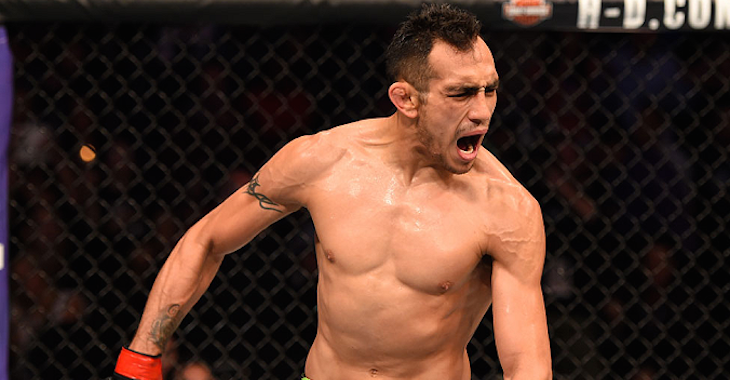 Tony “El Cucuy” Ferguson recently invaded the lightweight top ten and has no plan to stop his reign of terror— even after he captures the UFC Lightweight Championship.

“I’m here for the top ten. I’m here to wreck some s***, do some stuff and leave my name out there,” Ferguson told BJPENN.COM Radio. Less than two weeks removed from his fight with Josh Thomson, Ferguson is already wondering who his next opponent will be.

“I’m just wondering who’s next in line to take the next pounding.”

If Ferguson sounds confident, it’s with good reason; He is currently riding a six fight win streak that saw him take home $150,000 worth of bonuses for dominant performances. His most recent outing in the octagon against Josh Thomson earned him his latest “Performance of the Night”.

“This last fight, Josh Thomson, hat’s off to him. That dude’s a warrior, man. I threw everything that I had at him,” Ferguson said. “I threw a good plethora of different things that had to make everyone else in this division think that I’m changing this game up. I am evolving. EA Sports is going to have to upgrade their s*** because I’m changing things up— you might call me ‘glitch’.”

Currently ninth in the lightweight rankings, Ferguson wants to eliminate each fighter in succession before challenging the champion to leave no doubt he deserved his shot at gold. “I want number eight, number seven, number six. When I have the damn title, I want them to be able to be like, ‘You go fight him. No, you go fight him! Let’s all go fight his a** at one time.’ That’s how I want it,” Ferguson said.

“I want to put fear in these guys. I am the Boogeyman. You do not want to step inside that octagon with me. I hope everybody listens to this damn interview. I hope they’re scared. I hope they’re looking at their coaches saying, ‘How do we take this guy out? How do we do this type of thing?’ Because they’re not going to have an answer.”

How long before Ferguson is given a top-five opponent? Who would you like to see him fight next? Share your thoughts in the comment section below!