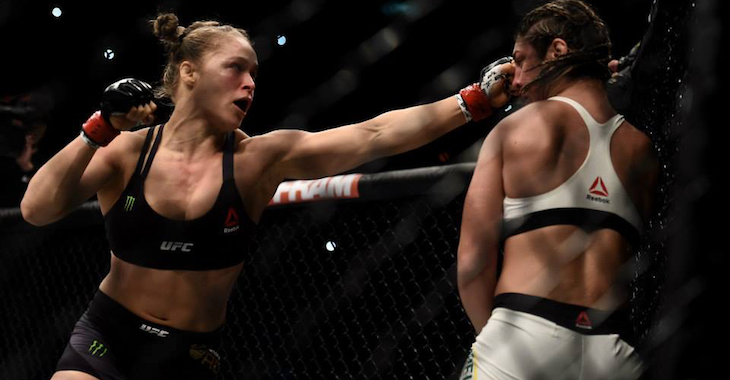 It’s no secret that the UFC Women’s Bantamweight Champion Ronda Rousey has little to no respect for the person that Floyd Mayweather is. His skills are undeniable, though; With an unblemished record of 48-0, nobody can argue the talent that is packed inside the gloves of “Money”.

Whether the fight has any chances of happening or not, both the mixed martial arts and boxing communities haven’t hesitated to throw in their two cents on Rousey’s and Mayweather’s feud. Everybody from Conor McGregor to Dana White backed Rousey up, but very few respectable names in the boxing world have shown their support for the female bantamweight champion… until now.

Multi-time featherweight world champion Maureen Shea not only said she would prepare Rousey for a hypothetical fight with Mayweather, but she truly believes the octagon-warrior could make a run for gold in the boxing ring.

“If you’re asking about Ronda’s boxing abilities, with the type of athlete that she is, if she’s given a significant amount of time training as a boxer, I think she would be an amazing boxer,” Shea said during a Periscope session. “But not right now. She is going to have to train for a period of time. You don’t just walk into my sport and say that you’re going to do what you’re going to do… Her athleticism, her desire to win, I respect every ounce of it. If given a certain amount of time and just train straight up boxing, I think she would do really well.”

When the topic of a bout with Mayweather arose, Shea did not shy away from saying she would back Rousey up. “Shit, I’d help her! I’ve got your back girl, come on. Listen, I’ll set it up, I’ll start it off, and you can finish it off. I’m all about it.”