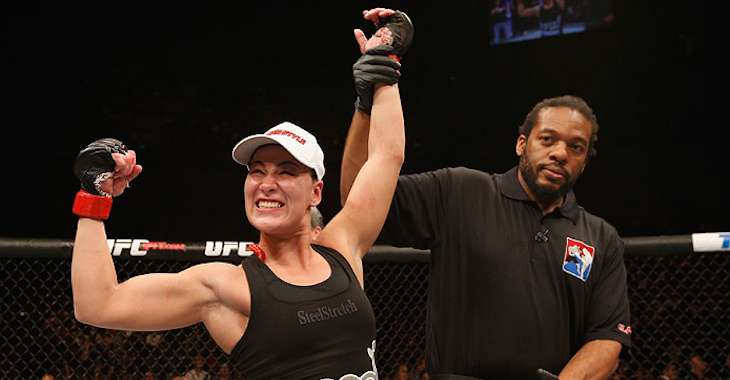 Jessica Eye has her sights set on Miesha Tate for their bout at UFC on FOX 16, but a win there could earn her a shot at Rousey. If Ronda Rousey successfully defends her belt against Bethe Correia at UFC 190, we could be seeing a title fight between her and Eye in the near future.

Jessica Eye isn’t scared for her arm one bit.

In a recent interview with Submission Radio, Eye predicted that her arm will be safe because it will be too busy blasting Rousey in the face. “Believe me, when I say, she’s not armbarring me, because she’s going to be eating my left hand the entire time”

She went on to analyze why some of Ronda Rousey’s competition didn’t look like they lived up to their potential in title fights. “I think a lot of females that fight Ronda show no conviction to a game plan,” Eye explained. “They come out there and they get so wrapped up in, ‘Oh my gosh, this is the champ and she’s armbarred all these people and she’s done that’, that they go out there and they play her game, and nobody’s shown any conviction against her. They’ve not gone out there, stuck to a game plan, and made her eat a million jabs.”