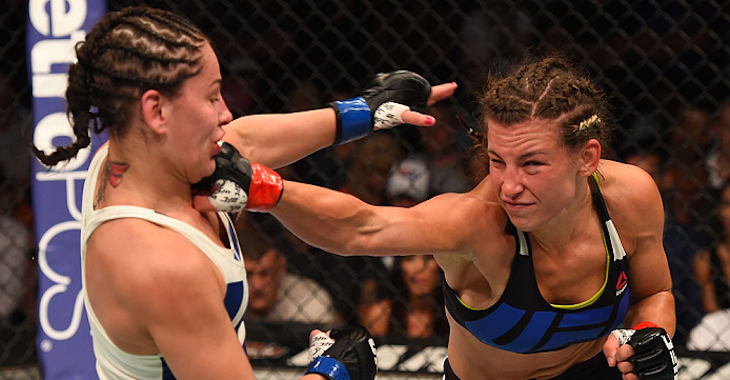 It’s hasn’t been the best morning for UFC bantamweight Miesha Tate, who was surprised by the news that UFC bantamweight champion Ronda Rousey would be fighting Holly Holm at UFC 195 and not her.

The news came via Rousey herself, who announced the news on ‘Good Morning America’ early this morning. There was no reason given by the champ for why Tate didn’t get the fight, even though it was promised to her after her win over Jessica Eye at UFC on FOX 16.

However, Dana White came out and said that it was simply because the world has seen Tate fight Rousey, and lose, twice. A new opponent, like Holm, made more sense.

“I am extremely disappointed how all the events unfolded this morning regarding news that I will not be fighting Ronda Rousey. I was told after my last win that I had earned the title shot.

“I’ve already begun training for Rousey and I was shocked to hear the announcement this morning. I regret this for not only myself, but my team, sponsors and the fans who like me believed my next fight was for the title.”
The Best Training Room You’ll Probably Ever See — D.C., Rockhold, Khabib, Velasquez All Training For UFC Greatness
[ooyala code=”J5c3UxdzpDWlYbuxxRyJVVXCUwnYxE3R” player_id=”bd214e34cfad476984102de4bf5e8da2″ width=”1280″ height=”720″ auto=”true”]