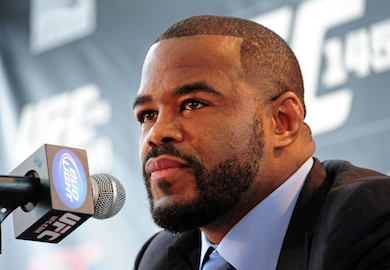 As Rashad Evans tells MMAJunkie radio, he and Daniel Cormier talk “more than any other fighter that doesn’t train in my camp.”

Evans and Cormier go way back to 2010, when Cormier helped Evans train for his bout with Rampage Jackson, the two even have running text conversations. However according to Evans that stopped recently; The last message Evans sent to Cormier was about Cormier’s love for Popeye’s chicken.

“I think I told him something about sending him some Popeye’s. That’s why he can never make weight, because he loves Popeye’s Chicken. He couldn’t make 211 (pounds) five years ago or so for the Olympics, so it’s going to be hard if he’s a little bit older, So it’s going to be hard, but maybe he has discipline now that he didn’t have then.”

After that, Evans hasn’t heard from Cormier.

“I think he’s kind of scared to text me now, But the thing about it is, you’ve got to put it on hold. You can’t be palling around, because it’s a fight. If I allow myself to think any other way than he’s someone who’s trying to separate me from consciousness, I’ve already lost. So Feb. 22, I don’t have no friend.”

Evans did recall however one message Cormier did send after the bout was officially announced.

It will certainly be interesting to see how this fight plays out on February 22nd as the Co-Main event of UFC 170.