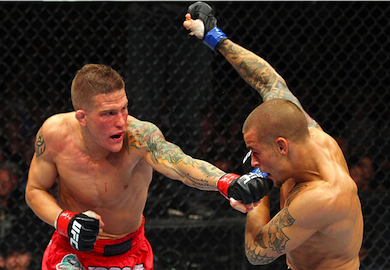 UFC officials have announced the addition of a lightweight bout in the form of Erick Koch (pictured, left) vs. Rafaello Oliveira.

‘UFC 170: Rousey vs. McMann’ is set to go down on February 22 from Las Vegas, Nevada. In the main event Ronda Rousey will make her second title defense against fellow olympic medalist, Sarah McMann. The main card airs live on pay-per-view.

As part of the Roufus Sports fight team, headed up by Duke Roufus, Erik Koch rose through the contender ladder at 145 pounds. However, in his last two outings the top featherweight prospect fell short against Ricardo Lamas and Dustin Poirier respectively. These two setbacks are the likely cause for Koch’s featherweight exodus.