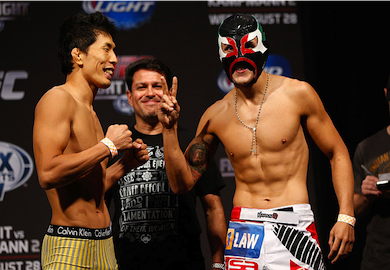 Erik Perez is coming off his first defeat inside the octagon, which he suffered at the hands of Takeya Mizugaki at the “UFC Fight Night 27” event in Indianapolis. Prior to that, the Mexican-born Perez had strung together 3-straight octagon wins, all of which came via first-round stoppage, over opponents Byron Bloodworth, Ken Stone and John Albert.

Meanwhile, Edwin Figueroa enters the contest on a 2-fight losing skid. “El Feroz” was TKO’d by Francisco Rivera at February’s UFC 156 event and was then out-pointed by Canadian Roland Delorme at UFC 161 in Winnipeg. Prior to those losses, the 29-year-old had posted back-to-back wins over Alex Caceres and Jason Reinhardt.