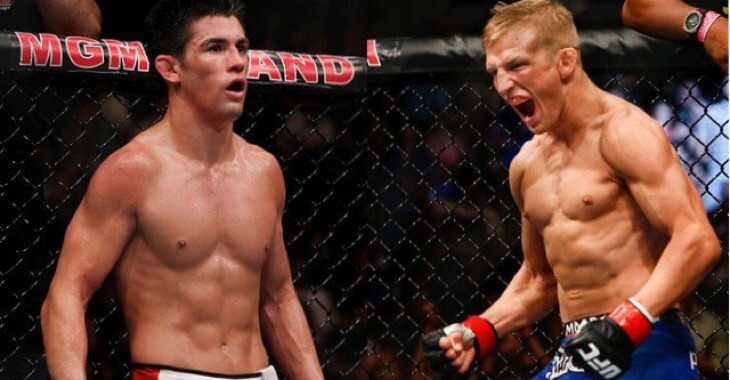 Dominick Cruz has been on TJ Dillashaw from the word go. His bold and confident stance on the outcome at Fight Night Boston has had the Dillashaw camp scratching their heads wondering if Cruz is thinking he can blast Dillashaw verbally and get away with it.

Ludwig gets with Bloody Elbow talk about Cruz:

“It’s something that entertainers do,” said Ludwig. “Rather than fighters and martial artists.”

Ludwig continued, “[Cruz] prefers being in front of the camera talking instead of doing, he’s just used to that routine. He’s not a martial artist, he’s a combative athlete like a handful of today’s MMA fighters. I don’t consider them martial artists, but combative athletes, they’re lacking discipline… well, maybe not discipline, respect, I’ll say that.”

When asked who else Ludwig considered ‘combative athletes’, Ludwig stated he prefer to, “Leave it at that.”

Dillashaw has responded to Cruz’s verbal bashing and looks to show Cruz who the real champ is after a combined 4 years of injuries and rehab sidelined the former bantamweight champion.

“One important aspect which people haven’t caught onto yet is [Dillashaw] being able to fight in both stances and the transitions in between,” He said. “He’s a modern day ninja, there is no one at T.J.’s level. Period.”

Is Dillashaw the true martial artist that Ludwig claims the champ to be? Who do you got against Cruz vs Dillashaw?