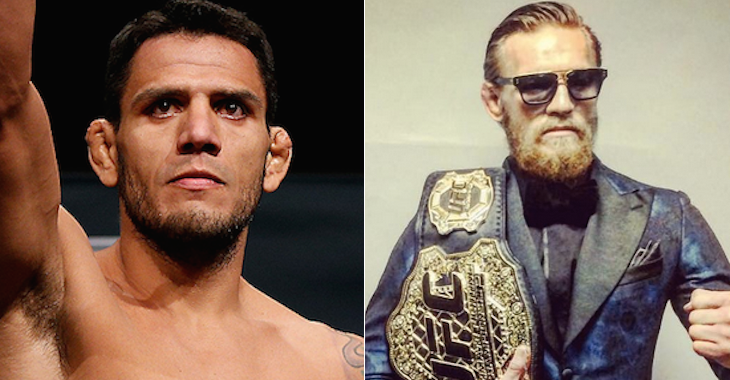 Conor McGregor has always had a bullseye on his back due to the ratings and viewership he brings with him. Whether his fights took place on Fight Pass or FOX Sports 1, his fans and haters ALWAYS followed. However, now that he is the UFC interim Featherweight Champion and the reports are saying he is a PPV-selling machine, fighters want to make it a point to get in the octagon with him— no matter the weight class.

Dos Anjos isn’t saying he’s the man to beat McGregor, though. The UFC Lightweight Champion claims that Jose Aldo and Chad Mendes could both beat McGregor if given a fair shot. “This guy has no chance. Aldo would destroy him,” he said. “If Chad Mendes was in shape, he would have destroyed him, he showed that. He walked right next to me and he’s too small, he looked like a chicken. Chad Mendes is strong, but McGregor has no chances. That fight really exposed who he really is. He’s that fighter.”

Who do you think would win in a clash between Rafael dos Anjos and Conor McGregor? Share your thoughts in the comment section below!

Translated and Transcribed by Guilherme Cruz of MMA Fighting