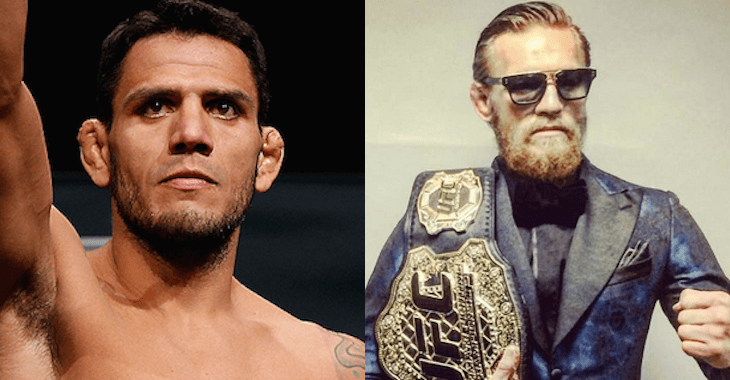 Conor McGregor may have his sights set on Jose Aldo for their bout at UFC 194, but you can be guaranteed the interim champion will continue to talk trash about any fighter that can make him some money!

Rafael dos Anjos’ path to championship gold was finally realized in Dallas, Texas at UFC 185 when he dominated Anthony Pettis for five rounds to become the new champion. Dos Anjos has won nine of his last ten fights and is on the streak of his life walking into his fight with Donald Cerrone at UFC on FOX 17 in December, but he wasn’t too happy with what McGregor said about him earlier in the year.

“There’s another man who has spoke my name in vain. And what happens is, when you speak my name in vain, no matter how many years down the line, I’m like an elephant — I’ll never forget. I’ll come and get you.” McGregor said in an earlier interview talking about Dos Anjos. “So, guess what Rafael? I’m coming to get you, too.”

“He’s beat good guys but he didn’t beat the top guys, he didn’t beat Frankie Edgar, he didn’t beat Cub Swanson, Jeremy Stephens,” Dos Anjos told Inside MMA. “There’s a bunch of guys that will beat him. Of course, if he comes to lightweight division I am the belt holder right now. I will make sure this belt will remain with me. Whenever he wants to step up and try to take this away from me I will make sure I’m going to keep with me.”

“He’s good for talking to people and he shows, you know, he feels comfortable when he do that. But, when we get locked in the cage it’s just two guys, you know.”

McGregor has already stated he eventually plans to move to the lightweight division. Who do you think would win if McGregor made the move? Share your pick in the comment section!