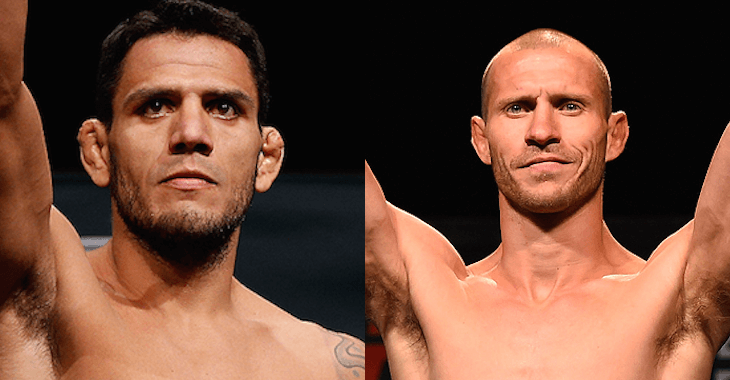 Rafael dos Anjos and Donald “Cowboy” Cerrone have signed the dotted lines and their championship fight for “UFC on FOX 17” is official. The bout is set to take place on December 19th in Orlando, Florida.

“Cowboy” will willing and able to fight on the big stage on any moment’s notice, so performing under pressure is nothing new to the thrill-seeker. However, UFC Lightweight Champion Rafael dos Anjos is convinced Cerrone will choke under pressure wen they finally meet.

“I think he’s still the same guy,” said Dos Anjos while on the MMA Hour. He’s like a soccer player, a good soccer player that’s at the finals and he has a penalty kick and a chance to score, and he kicks it out of the goal. I think he’s that kind of fighter, you know? When I have big tests, I always go over it. And it will be no different on December 19th. Of course, I think so (he chokes in big fights). And he knows that.”

Donald Cerrone is currently riding an eight fight win streak over the likes of John Makdessi and Benson Henderson, but he has come up short three times before when fighting for gold in World Extreme Cagefighting. That was nearly five years ago and Cerrone has evolved into a completely different fighter; Do you think Cerrone will be able to take home the gold this time around, or is Rafael dos Anjos right? Share your thoughts and make your predictions in the comment section below!