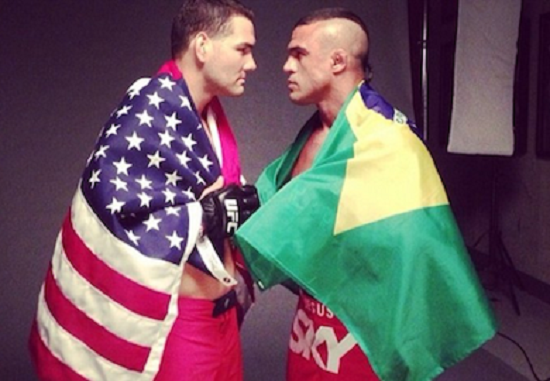 The UFC is heading into arguably the biggest stretch of fights in UFC history with Jon Jones vs. Daniel Cormier at UFC 182 this weekend, Nick Diaz vs. Anderson Silva at UFC 183 at the end of January, and then Chris Weidman vs. Vitor Belfort at UFC 184.

Ahead of the bouts, MMA Legend Don Frye predicted the upcoming main events and bouts.

“I’ll tell you what, the build up has been pretty decent man. These two boys have been bringing it. It’s been a lot of fun and very entertaining, but I think Jones has bit off more than he can chew. He’s been bragging, and it happens to us all. It happened to me, it happened to Mark Coleman, you know it happened to Kerr, it happened to Fedor. After a while, after so many wins you get bored, and you stop training so hard, and you start trying to phone it in, and you realize that hey some of these guys, they own the phone. You know, s—.”

“I think that Jon’s at that level where he’s just bored with it. He’s over-impressed himself and Daniel’s got a heck of a resume and he’s a heck of an athlete. I think besides Dan Severn I think he’s the best wrestler who’s came into the sport, and he’s not afraid of getting hit. So I think it’s going to be a barn burner. I think this will be the fight of the decade.”

“I wanna go with Nick Diaz. You know, I like Anderson Silva. I respect him. Back when we were fighting we fought on 4, 5, 6 cards together back there in Pride and he was always a gentleman. Always a gentleman. And I have much respect, you know very polite. We were in the locker room and my wife was in the locker room with us a little bit too long. You know I like to keep her in there, make sure she’s safe, and then after a while I send her out to go get her seat so I can change the channel. You know, switch my mind. And Anderson came in and he took his shower and he covered himself completely [with a towel] while he walked by. Me? I don’t have any class at all. If there’s a woman in the locker room and she shouldn’t be there, I’d just have flung it at her, you know. Hey, this is where men belong here, woman don’t. Anderson has so much more class than I do it’s unbelievable.

“But the unfortunate thing is, that’s a hell of an injury to come back from, for anybody. Anderson’s one of the greatest fighters of all time, but Nick Diaz is one of the toughest fighters of all time. I mean there’s a difference. Nick, he’s a scrapper, he’s a fighter. It’s not any kind of beauty. It’s like beauty and the beast between these two, because Anderson’s a beauty and Nick’s a beast. When it comes to fighting, Anderson’s all techniques. You know, speed and style. And Nick just comes to fight man.”

“Of course, of course. I think Vitor needs to go back in for another Gynecomastia operation. He got caught once again and things aren’t nothing in his favor, and Chris is here to stay for – you know he’s going to run the gauntlet for about three more years.”

“I think Vitor’s like a cat. He’s got more than nine lives. Every time you think he’s done he comes back. He’s just not at the top of his game. He’s not who he was back in ’96, ’97. You know, we all get old and we all lose a step. Unfortunately he’s lost several, and you can’t afford to lose half a step against someone like Weidman. I hate to crawl up Weidman’s butt like everybody else, but the kid’s got it going. He’s got the wrestling pedigree and he can throw fists. And obviously he’s got the toughest shins in the world”