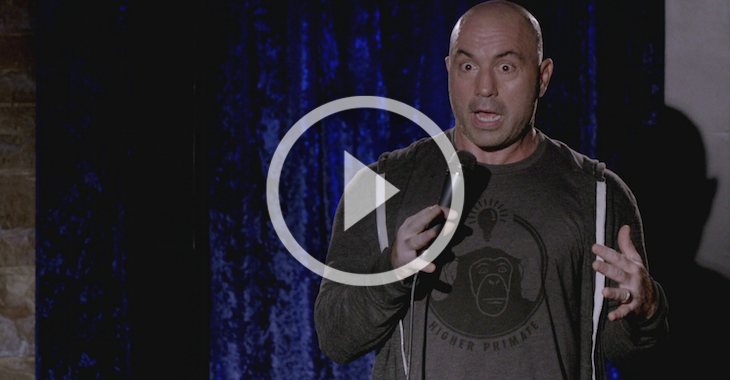 Joe Rogan has been teaching the ‘Average Joe’ MMA fan what to watch for inside the Octagon for over a decade.

The UFC’s commentator is an expert in all things martial arts, and he shares that expertise with every man, woman, and child sitting in front of a television on fight night.

The one knock against him though, is that he sometimes appears to show favoritism with his ringside play-by-play analysis, and fans are quick to point out this shortcoming when it goes against their favorite fighter.

During last night’s edition of Stud Show Radio a caller was distraught over Rogan’s word selection during the McGregor vs. Mendes title fight, and he wanted a couple Team Alpha Male guys to weigh in.

Mendes cornerman and host of Stud Show Radio Justin Buchholz admitted he hadn’t seen the fight on T.V., but the man to his left, “Sir Studbook” offered up his theory.

“He’s had a beef with Alpha Male for awhile because we have the best podcast in MMA,” stated ‘Studboy’. “I think it’s because I punked his boy Brendan Schaub.”

And while there is likely some real truth to “Studboy’s” claim [insert sarcasm], Buchholz offered up a different take.

“He’ll get on one… He’ll get so obsessed with someone else. Like whoever he’s favoring in the fight,” stated the UFC veteran. “His commentary reflects that a bunch.”

Buchholz Continued, “Like with Faber and Rivera. I think he was so odd, Rivera was hanging in there with Faber, so he gave him a bunch of credit.”

“I know that happens a lot. Like when you have two guys matched up and this guys supposed to be so incredible and then someone’s in there with him… Know what I’m saying?”

Justin stops short of calling Rogan biased, and offers up what is likely the most logical explanation for Rogan’s highly criticized commentary skills, but is he right? Do you agree with this logic, or does Rogan have his favorites?

Hit play above to catch the replay of the segment in question, and join the discussion every Tuesday and Thursday night on BJPENN.COM.

Stud Show Radio is on iTunes, and Stitcher. Subscribe Now!