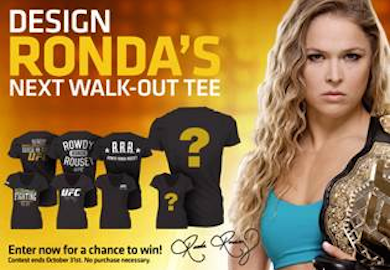 The UFC is calling all fans, artists and designers to show off their creativity and submit a design that will be worn by UFC women’s bantamweight champion Ronda Rousey as her Walkout T-shirt at her next fight. The UFC and Rousey are looking for a creative, unique design that showcases her personality. There is no cost to enter and entries must be received by Friday, Oct. 31.

“I’m excited to see all of the designs from our fans,” said Rousey. “Walkout T-shirts are an expression of the fighter and this contest gives one lucky designer the opportunity to be represented as part of the fight night.”

Rousey (10-0, fighting out of Venice, Calif.) has dominated the female sports world over the past few years. She broke through MMA’s glass ceiling and became the youngest Judoka contestant (at 17 years old) to enter the Olympic Games in Athens winning a bronze medal. Her move to mainstream spotlight followed after she became the first female fighter to sign a contract with the UFC. Since then she has appeared on covers of magazines including ESPN’s “The Body Issue” and Maxim. She coached the 18th season of the UFC’s reality television show The Ultimate Fighter® and crossed over into the world of Hollywood with roles in “The Expendables 3,” “Fast & Furious 7,” and the upcoming “Entourage” movie. Rousey has finished all her opponents inside the Octagon and the 16-second knockout victory at UFC 175 in July marked the third time she finished an opponent in under 30 seconds. Seven out of her 10 career victories have occurred in under a minute.

Anyone interested in participating in the contest should submit designs online at www.UFC.com/RondaTee during the contest period. The designs must be original and include the UFC logo and name “Ronda ‘Rowdy’ Rousey” or “’Rowdy’ Ronda Rousey.” Entries should be designed at 300 dpi or be in vector format and saved for web as a 1200 x 1200 JPEG file. For complete details and official rules, visit www.UFC.com/RondaTee. Contest ends Oct. 31, 2014. No purchase necessary.