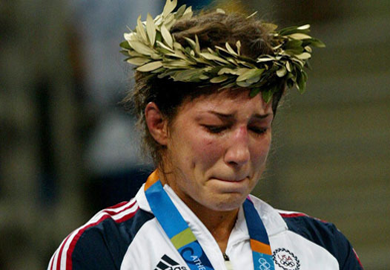 “Part of the lack of desire for money and fame is the desire to spend as much time with my family as possible, creating the memories that really matter to you. People on their death-bed don’t say ‘I wish I had more money and fame’.”

Sara McManns journey through her earlier years wasn’t that of a typical athlete. At the young age of 19, McMann lost her brother when he was viciously murdered after a confrontation with a group of athletes who attended Lock Haven University, back in January of ’99.

Not five years later, McMann had to endure another tragedy when she grievously lost her fiance, former ASU three-time NCAA wrestler, Steven Blackford, after their car ran off the road, ejecting Blackford from the vehicle, killing him at the scene. Luckily, McMann, who was driving at the time, survived the accident.

“Emotionally, it’s the equivalent of losing a limb, you never have that limb back. You’re never the same person”, exclaims McMann. “I think it helps me define the life I want to live and what I want, just being exposed to mortality.”