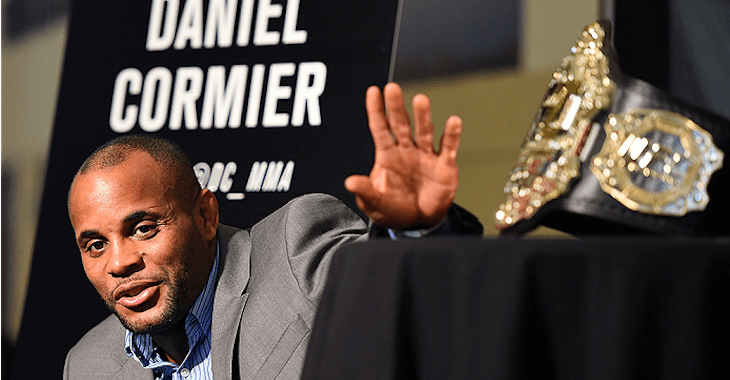 UFC Light Heavyweight Champion Daniel Cormier is taking some much deserved time off after a busy year. Cormier kicked off 2015 with a championship fight against Jon “Bones” Jones and even though he put in a losing effort, he still showed that he could be championship material by going the distance.

Cormier would return to the octagon in May to fight for the belt, but it wasn’t around Jon Jones’ shoulder this time. Jones had just been suspended for his April run in with the law and the championship was vacated and its fate would be decided in a bout between Cormier and Anthony “Rumble” Johnson. Cormier would be successful in his attempt to capture gold this time, and he went on to successfully defend it in a physically demanding match with Alexander Gustafsson.

The match was so brutal, Cormier revealed that he would be taking some much needed, and much deserved, time off to heal his body. Now, with the return of Jon “Bones” Jones looming over the light heavyweight division, Cormier’s time away from the octagon may be cut short! His beef with Jones is escalating quickly and could lead to a match sooner, rather than later.

Cormier will be showing off his gold in the months leading up to his fight with “Bones” in order to remind Jones who the true champion is right now. He recently shared a picture on Instagram that reminded everyone he’s not JUST heavy hands… he has a sense of humor too:

Bae #2 wanted to go to the gym today. I said ok but I told her u don’t need ur seat belt, she wouldn’t let me leave until she put it on. We argued for 10 minutes but eventually she won out. She always gets her way. #champproblems #beltproblems #spoiledbrat #spoiledbelt #shesbeautiful #imakeepyouforever 🙂