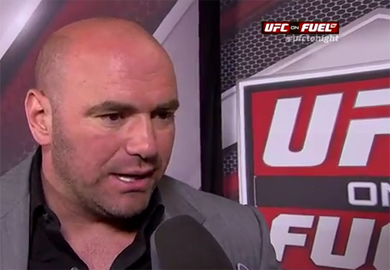 “We got the word, after Jon went out and got his elbow checked, that he was out and couldn’t fight until April. So it made sense for him to do The Ultimate Fighter. Machida can fight, Dan Henderson can fight; Gustafsson and Shogun are gonna fight in December, so everything will keep right on moving (in the division). Obviously Chael wants this fight, has been asking for this fight. The fans wanted this fight. Jon said, ‘I can’t fight until April. I’d like to go in there and whip Chael’s ass and then I’ll defend the belt against whoever you want me to defend the belt against.’ So it made sense.”

“I’ve said this before and I’ll say it again, Dan Henderson had the opportunity for the fight and he got injured, right? He got injured, now Jones is injured until friggin’ April. Every one of these guys that are bitching about a title shot now, were offered a fight and turned it down. They refused to fight Jon Jones. Now, they’re bummed out because Chael stepped up on eight-days notice and he’s gonna coach The Ultimate Fighter and fight him. All the top contenders that are pissed off that Chael Sonnen has a title shot are the same guys that I called that turned down fighting Jon Jones.”

Having not beaten any top 20 opponents in the history of the UFC’s light-heavyweight division, Chael Sonnen, was recently granted a TUF coaching gig and subsequent title shot against Jon Jones.

The media, fans and his fellow fighters have cried foul play and yesterday during the UFC’s tele-conference, UFC president Dana White explained his decision process.