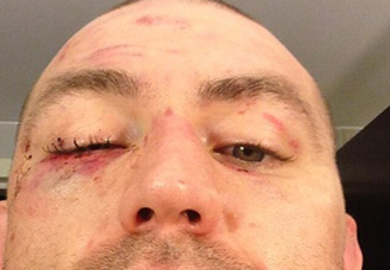 UFC 159 was one of the strangest events in the promotions history. The pay-per-view saw two technical decisions handed out as a result of accidental eye pokes, as well as a couple of gruesome injuries.

UFC President Dana White talked about some potential new gloves during his appearance on ESPN 710-AM in Los Angeles on Tuesday:

“We actually have started to work on a new glove that actually curves your hand, like the glove is curved like a ‘U,’ so you can still open your hand, but your fingers don’t point straight out.”

White believes the real solution may be with the fighters themselves, as the promotions current gloves are already approved by state athletic commissions.

“Guys need to keep their damn hands closed, you can’t reach out toward the face with the hands open in a fight. You can’t do it.”

UFC officials have stated that the project is still in “early stages” and couldn’t provide any further details on the new glove or when it might be put into use.  But, I’m sure guys like Alan Belcher and Gian Villante will appreciate the news/progress.