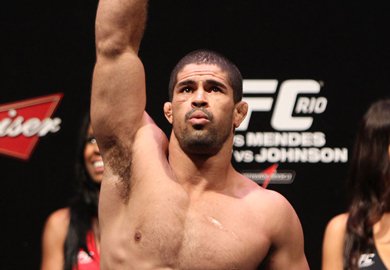 Palhares looked to return to form and show the UFC and his fans in his native, Brazil, that he was back and ready to use his signature finish, the heel-hook, in his battle against Mike Pierce on the main card in a highly anticipated bout.

31-seconds after the opening bell, Palhares was victorious via his go-to move, a heel-hook.

His first victory at welterweight was marred, however, by bad judgement on the part of Palhares who held the leg-lock a bit too long, refusing to let go when Pierce clearly tapped multiple times, and even torquing the hold a bit more when referee Keith Peterson intervened to stop the bout. Palhares finally let go after no less than seven taps by Pierce and a physical intervention by Peterson prompted the Brazilian that he had won.

This lapse in judgement has become the biggest mistake of his career, as according to UFC president Dana White, Palhares has been banned from the UFC.

As tweeted out by ESPN reporter Jeremy Schapp, White state on Thursday’s episode of Olbermann that Palhares has been banned from the UFC:

Palhares’ actions came under heavy scrutiny from MMA media, UFC brass, and fighters alike for establishing a pattern of this. He was once suspended following his UFC 111 win over Thomas Drwal for the same exact thing and has also comitted such an offense in straight grappling matches.

The initial reprimand for his actions was a missed opportunity to collect on the ‘Submission of the Night’ bonus, which was dissolved for last night’s event due to ‘unsportsmanlike behavior‘.

Palhares’ actions have now been ultimately deemed unsuitable behavior for the UFC and understandibly so as this type of unsportsmanlike behavior doesn’t belong in the premier MMA promotion.