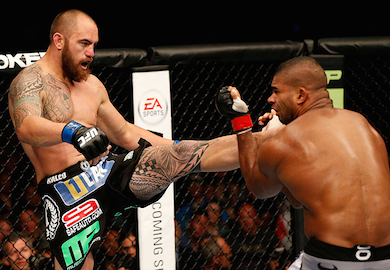 “I honestly think that Alistair [Overeem] fight changed him; it completely changed him into a different person. He talked to me that night after the fight and said that he had never felt so close to death and that the shots he took to the body were unbelievable. After that fight, he is a completely different person now. He is more motivated. I don’t know if that showed him that he really belongs in the upper echelon of the [heavyweight] division or that he should be the champion, but he is a different guy.”

“I was watching some of the footage from when we went to film him for ‘Road to the octagon’ and he is a completely different person. He is talking about knocking people out and finishing everybody. He is just meaner and nastier. “

Who ya got, Browne or Werdum?