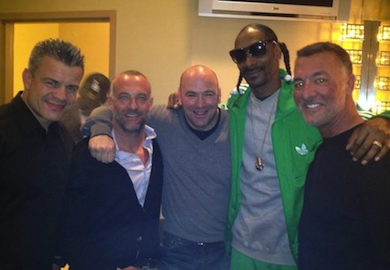 UFC President Dana White wasn’t particularly a fan of football prior to his son’s involvement with the sport.

His son, who is also named Dana, plays youth football, and has aspirations of attending Bishop Gorman.

The UFC President spoke with USA Today Sports about his children’s love of football.

“My kids are playing football now in the city league. They want to go to Bishop Gorman and play there. There are tons of little kids running around in the Nevada Youth Football League and it seems every single one wears Gorman stuff.”

“(MMA) and football are both contact sports, but my kids are in love with football. My oldest son, Dana, is a football fanatic. He didn’t get that from me and he’s gotten me into it. The Gorman games are fun because they’re playing real teams every week.”

“There’s always a balance here. It’s not uncommon to see Dana around campus. Sometimes you’ll see Snoop Dogg (the father of Gaels receiver Cordell Broadus) or Randall (Cunningham, the father of last year’s quarterback, Randall Cunningham, Jr.) at practice. We’ve had a lot of guys who come through here. Aaron Rodgers threw the ball around with some of the players a couple of years ago. It’s not totally out of the realm to see some of these guys.”

In addition to Snoop Dogg’s son, and Randall Cunningham’s son on the team is Lorenzo Fertitta’s son Nicco, who is a defensive back for the team, and just so happens to be a huge Conor McGregor fan.