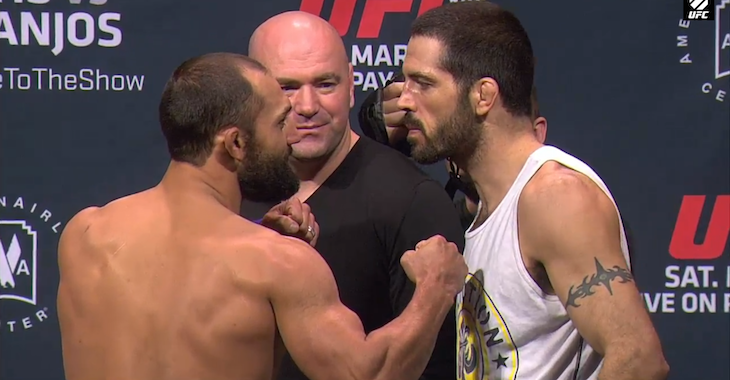 UFC 185 was an exciting night of fights that included highlight reel finishes and major upsets, including two champions losing their belts. In a fight that could have easily been a main event on a different card, welterweights Johny Hendricks and Matt Brown met to possibly determine the next title challenger. At least that’s what UFC president Dana White said leading up to the fight.

Hendricks, who used his superior wrestling to take Brown out over and over again, won the fight via unanimous decision. When Joe Rogan met Hendricks in the octagon after the fight for the post-fight interview, Hendricks immediately made a point to criticize his own performance. He acknowledged Brown’s toughness but said he was disappointed that he couldn’t finish him.

Apparently some one else wasn’t very thrilled with the fight either. That someone being Dana White. Here’s what he had to say to FOX Sports 1 about Hendricks.

“I’m happy for Johny. Johny has come off a rough, I guess we’ll call it a couple years. But I didn’t love the fight. Didn’t love it.”

At the post-fight press conference White backed off of announcing Hendricks as the next title challenger.

“We’ll see how this thing plays out. A lot of different things happen. I’ve seen guys say, ‘hey, I want to sit out and wait for that belt,’ and they don’t end up fighting for that belt for two years. So we’ll see what happens. It’s usually not a really good decision, but sometimes it can work. If it works out, then it will. If not, I’m sure Johny will take the option to fight.”

Do you think Hendricks did enough to get another shot or would you like to see him fight again before he goes for the gold?