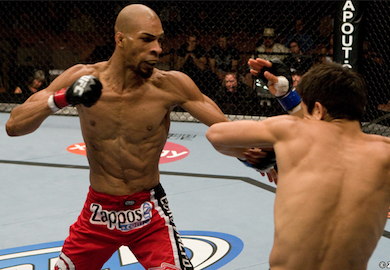 Last weekend in the UFC 168 main event fans witnessed a horrific accident when Anderson Silva broke his leg on a checked kick.

As bad as his injury is, Silva’s break wasn’t the first such occurrence under the bright lights of the UFC.

Before Silva, there was TUF contestant Corey Hill (pictured).

Hill, who recovered from his injury to compete again, recently talked to MMAFighing.com about his battle with recovery through this terrible injury type.

“I sympathize for what [Silva] is going through, and what he is going to go through. MMA fans aren’t the nicest people out there. We dealt with so many people sending us messages via Facebook, cards. Some people were happy. ‘That’s what you get, man! You broke your leg!’ It’s like, how cruel can people be? You can’t jog for long. When it gets cold, it rains, it’s crazy. You always hear old people talking about, ‘I know it’s going to rain, I can feel it in my joints.’ I feel it. It gets too cold man, you can’t run. Because that rod, something happens to it, I feel the pressure as I run. I feel that rod going up into one of my bones. So instead of being the old Corey where I just run through it, tell me body to shut up, now I get on the bicycle. The minute [Silva] broke his leg, I remembered ice and elevation and bed sores. You can’t move. You’re immobile. You pretty much live your life on pain pills as best as possible. It’s just an absolute, indescribable feeling. It sounds weird, but until this happened to Anderson, to be honest with you, man, it almost sounds crazy, but I was embarrassed. You get so embarrassed. Everywhere you go, you’re the guy who had the broken leg. It’s scary sometimes. It doesn’t stop everybody I fight from kicking that leg. It doesn’t stop everyone from going after it. That’s part of what we signed up for. And you know that going into it. You know, the first thing this guy is going to do, he’s going to kick your leg.”

An image from our archives showing Hill’s injury can be found HERE.