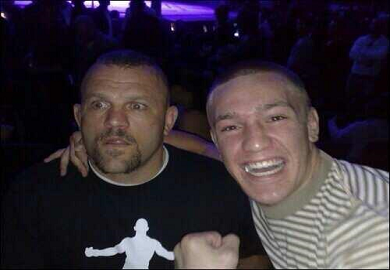 They don’t call Conor McGregor “Notorious” for nothing. Today the 25 year old UFC fighter Tweeted a picture of himself at his first UFC event, where he photobombed UFC legend Chuck Liddell. Check out the priceless picture below.

16 years old at my very 1st @UFC event!! I dived on @ChuckLiddell, he didnt know what was happening haha!! #Legend pic.twitter.com/bAGPjiyYDS

McGregor tore his ACL in his last fight against Max Holloway, but will be making his return against Cole Miller at UFC Fight Night 46 in Ireland on July 19th. In case you’re behind on the Miller vs. McGregor beef, check it out here.