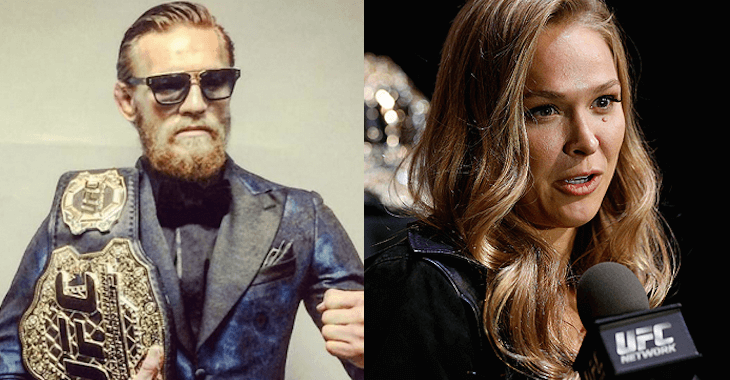 There is no denying the fact that Conor McGregor and Ronda Rousey are two of the biggest stars in mixed martial arts today. “The Notorious” dished out impressive numbers for his main-event role in “UFC 189”, but “Rowdy” was essentially a one-woman-show with her more successful “UFC 190”.

Both McGregor and Rousey have torn through all of the competition UFC officials put in front of them and they are both champions, but Rousey has defended her non-interim championship a total of six times— dominating each opponent. Despite the two being different gendered and in different weight classes, fans seem to constantly compare the two and it looks like McGregor is flattered by this.

McGregor continued, “I believe, in the male spectrum, that I’m dominating the game. 100 precent. However, in the female aspect, Ronda is a two-time ESPY winner now. She’s a dominant champion. It’s very hard for her because she is so dominant.”

“There’s a lot of questions about me. I am thankful for all the questions being asked about me because that generates interest which in turn generates revenue. Ronda’s just so dominant. She’s slaughtering these women ruthlessly.”

Do you think the champions are equal, or does Rousey have a bit more pull than McGregor? Is it the other way around? Share your thoughts in the comment section below!